Odoff is our bestselling odor neutralizer. We offer Odoff in nearly all of our scenting devices.

Our customers love Odoff BECAUSE IT WORKS! There are many ineffective, odor masking products out there. However, Odoff targets odors directly at the source. 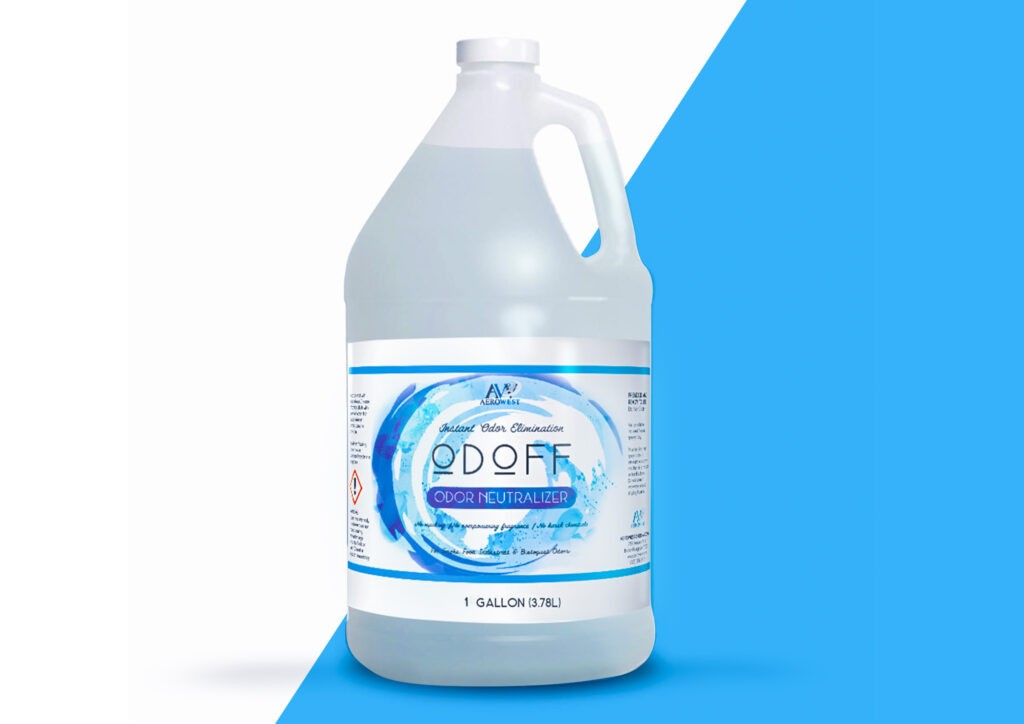 In drip systems, sprays and odor control mechanisms, Odoff reacts with odorous chemicals and renders them non-volatile at the molecular level, so you can’t smell them anymore.
Most of the odors produced by humans, animals and waste products are associated with two basic types of compounds: sulfur compounds including hydrogen sulfide, and ammonia compounds. You know that cabbage odor of rotting vegetables? The odor is a mercaptan. Mercaptans are sulfur compounds that are very stinky. Ethyl mercaptan is added to natural gas to make it smell bad for
safety reasons.

Mercaptans are in a lot of everyday compounds:

Odoff reacts with these odors and makes them non-volatile. That means that the odors you might normally smell have combined with the Odoff molecule rendering them odorless.
The odor that you normally smell in a cat box or bathroom is an ammonium compound. Ammonia is the breakdown product of urea, the waste product in urine. Urea breaks down to ammonia due to the natural presence of the urease enzyme, which also gives fecal matter its odor.

Understanding the Chemistry Behind

• The C=N bond is the most attractive site for bonding with Sulfur atoms. In the book The Chemistry of Organic Sulfur Compounds the author specifically states that “the interaction between sulfur and the π orbitals of the C=N links is far greater than anything that occurs with oxygen or nitrogen substituents.”

• The Nitrogen’s empty orbital can expand its bonding capability to allow enamine stabilization to help use the ring structure to lock up Sulfide molecules.

• Sulfur’s d orbitals interact with the double bonded Nitrogen in Odoff. Recent literature searches have found that the unusually large amount of Hydrogen Sulfide removed by Odoff in aerobic environments can also be explained by enzymatic reduction of the aromatic imine to create free radicals that contain an extra electron. Once formed, the free radicals react with oxygen to produce superoxides and then regenerate the unchanged imine conmpound. These superoxides (dissolved radical oxygen molecules) may be a source of oxygen increase that has been observed in aerobic systems. These superoxides can also participate in oxidizing Hydrogen Sulfide molecules in situo or by themselves. This process is described by enzymatic futile cycling, and has been observed in proceedings from the National Acadamy of Sciences.

• Other literature states that intermolecular peroxide formation can encourage a catalytic process involving oxidation of a complexed sulfur group–as is quoted, “They reveal that this oxygen exchange commonly proceeds in concert with hydrogen exchange within an inter- or intra-molecular peroxy complex during interaction with the sulfide. A free radical chain process introduces oxygen into the sulfur complex at a position alpha to the sulfur atom, and then several secondary and in part competitive reactions, which are broadly definable, rapidly ensue to yield a complex product mixture.

• Similar literature states that the chemical reagents necessary to create the oxidation or the peroxide type radical only require aeration–as quoted,”The oxidation can be brought about by mild reagents such as air or oxygen or chemical reagents–more vigorous conditions can convert the disulfide into more highly oxidized products.

• This phenomenon has been documented that ethanolic groups in oxygenated solutions like aerobic digestors can be oxidized to the corresponding peroxide compounds in small quantities. This peroxide can oxidize sulfur molecules trapped at the nucleophilic carbon due to their proximity to the ethanolic tail. The ethanolic side chain stabilizes and encourages Sulfur/Oxygen interaction by hydrogen bond coupling. Physical models of these molecules show that the bond distances of the ethanolic side chain are the perfect distance for hydrogen bonding of the Sulfur atom trapped at the nucleophilic carbon.

AeroWest is a pioneer in the field of odor control & facility services. Since 1883, we’ve been developing the industry’s best odor control & air freshening products. Call us to try our services today. 225-302-5570 or e-mail info@aerowest.com